The History of Insurance Underwriting Explained in 2 Minutes 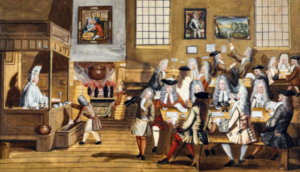 In 1680, a 32-year-old man by the name of Edward Lloyd arrived in London with his family. With ambitions of breaking into the 3,000+ coffee shop market, he established Lloyd’s Coffee House on London’s Tower Street.

Today, coffee shops are patronized for their casual and convenient locations to meet friends and associates or to simply use free Wi-Fi to do work. Back in the 17th century, coffee shops were popular for gathering and sharing news and for providing a place for intellectual debate – especially for sailors, ship owners, and merchants.

By 1691, Lloyd’s gained a reputation for being a place to get the latest shipping news and for announcing maritime auction prices. Bankers began collecting “premiums” in exchange for taking on shipping risks for the scheduled routes that were being announced.

Lloyd’s is considered the birthplace of the modern insurance industry. The bankers would physically write their names under the ships listed on the wall-to-wall covered blackboards which showed detailed information about the cargo, crew, destination, and weather. This is how the word “underwriting” came to be.

Underwriting is the process through which an individual or institution takes on financial risk for a fee. Most typically, the risk involves loans, insurance, or investments. Over 300 years later, insurance has grown into a multi-trillion-dollar industry. Lloyd’s of London, as its known today, is an insurance and reinsurance market that continues to be a staple in the insurance world.

But when did the concept of insurance actually begin? Almost 4,000 years ago, the Babylonians created a system for merchants to pay additional sums of money on top of loans to fund voyages across the Mediterranean Sea. This payment would guarantee that the loan would be canceled if the ship was stolen or lost at sea. Prices varied during different times of the year due to weather. In short time, the Babylonians developed what would be seen by future generations as risk-based pricing – the foundation to insurance.

Risk Resource works with specialized underwriters across hundreds of insurance and reinsurance companies to provide our clients, the consumers of insurance, with various insurance products for many different types of purposes and needs. We play a niche role in the grand workings of the insurance industry.

This month’s newsletter was inspired from a book I read recently; The Future is Faster Than You Think by Peter Diamandis.